At sundown on December 1st, Hanukkah begins. I thought I'd make a little menorah of my own for Template Tuesday. I tried to pattern it after traditional Jewish papercutting. I hope I didn't do their craft a disservice. 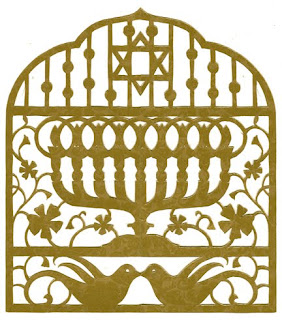 According to wikipedia, here is the origin of the holiday:


From the Hebrew word for "dedication" or "consecration", Hanukkah marks the rededication of the Temple in Jerusalem (Second Temple) after its desecration by the forces of the King of Syria Antiochus IV Epiphanes and commemorates the "miracle of the container of oil". According to the Talmud, at the re-dedication following the victory of the Maccabees over the Seleucid Empire, there was only enough consecrated olive oil to fuel the eternal flame in the Temple for one day. Miraculously, the oil burned for eight days, which was the length of time it took to press, prepare and consecrate fresh olive oil.

This one is a folded cut, so it's half as much work, but this still took me about an hour to cut, so expect to be spending at least that much time with your penknife. 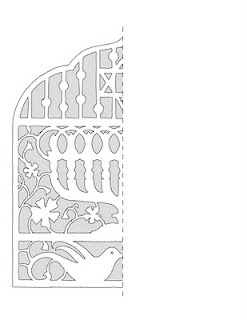 that's lovely. I'm gonna give it a try, thanks for doing this!

Thank you so much for this template , it is beautiful ! I think my grandchildren will be so happy to have one of these special pieces to enjoy (matted and framed) throughout the yrs. May you and yours be blessed.
Again,thanks

Just a quick note to let you know that a link to this post will be placed on CraftCrave in the Cutting category today [02 Dec 01:00am GMT]. Thanks, Maria

Lovely, thanks so much! I've been wanting to do some Hanukkah papercutting with tissue paper, so maybe I'll have a moment to try this one! Would love to see you at my weekly linking party once it resumes in January! all the best, Sara

Thanks for this template. I pulled a few parts out and mixed them up to make a paper lantern.

Cindy Bean
Salt Lake City, Utah
I have been designing for 15 years and papercutting for 7. I love them both!