For the month of February, I was locked up in the Tower of London! Fortunately I made it out with my head intact and a wonderful project to show for it. I was commissioned by the Education Center to do eight large papercuts for their teaching room. Here they are:

This one is, by far, the most elaborate of the set. I researched out what animals were in the Menagerie, what years they were there and the stories about them. Then I had to figure out how they all looked and did a lot of research on the internet to find out what a hyena's hindquarters looked like. It was great fun.

King Bran and the Ravens 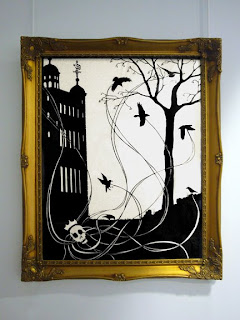 There is a legend that the head of King Bran is buried under the White Tower and that is the reason why so many ravens are present (Bran means raven). Apparently if the ravens never leave the confines of the Tower, the kingdom will never fall.

Colonel "I Drink Up Your Crown Jewels" Blood 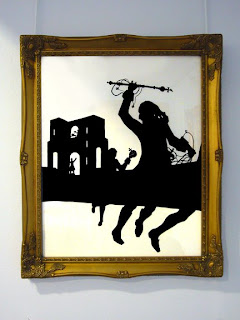 The only time the Crown Jewels have successfully been stolen was back in 1671 when Blood thieved the jewels from Martin Tower where they were being kept. He was caught and pardoned and given some money and a place to live. Sort of posh treatment for someone who made off with the riches of England, eh?

The Beheading of Anne Boleyn 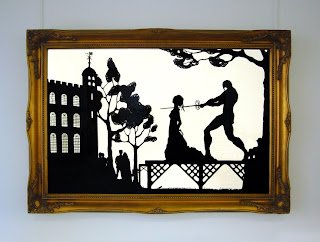 Anne Boleyn spent her last minutes thinking she was going to be pardoned. Okay, I don't really know that, but that's what the Yeoman Warders say when you take the tour at the Tower of London. They say that she was praying as her head was chopped off and when they lifted it up for all to see, her lips were still moving. She is buried in the chapel behind the execution site.
Ranulph Flambard 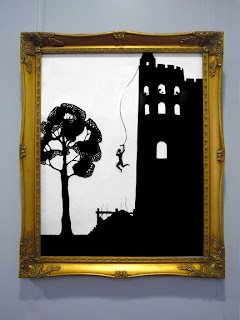 Flambard was one of the lucky ones to escape from the Tower. One night, he got all the guards around him drunk and used the ropes surrounding the flagons of wine to form a rope from which to escape from his high cell in the White Tower. Unfortunately the rope was too short, fortunately he landed in a giant cesspool beneath him. 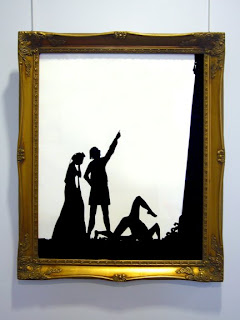 In an instance where patience is a virtue, Gruffydd ap Llywelyn is the perfect example. His wife had petitioned for him to get out of the Tower and he was about to be set free. He wanted to get out sooner and fashioned a rope out of sheets to help him escape. The sheets weren't tied together tight enough and so they snapped and he fell to his death. No one could recognize who he was at first because he landed on his head and it impacted it down into his body. 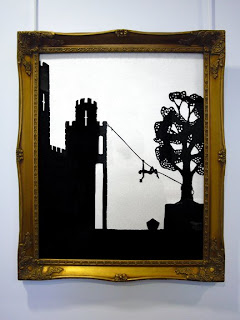 Gerard was another escapist from within the confines of the Tower. He was able to shimmy his way out with the help of some friends via a rope from the Cradle Tower. His hands were so swollen from being shackled whilst therein that he fell on his way out, but managed to escape anyway. 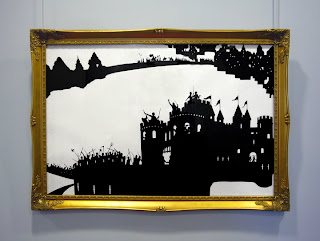 The peasants are revolting! 1381 was a tough time for Londoners. Their taxes had been raised three years in a row and the Black Death had reduced the population significantly. One day, as the young boy Richard II rode out to negotiate with the people in town, the gates were left open to the tower and the peasants stormed in. The guards did nothing to stop them and so treason was suspected.

These are the people I worked with in completing this project. They were oh so very helpful. From left to right: Dan, Alex, me, Dorothy and Canev. In order for me—who had just barely figured out that Tudor style houses are in reference to the Tudor age—to finish this job, I had to have a lot of help. They were wonderful. Also very informative was Brigit from the library and Sutherland who offered moral support 100% of the time. A big thanks to Alex who offered me the opportunity to do these papercuts and had the patience to help me see it through. 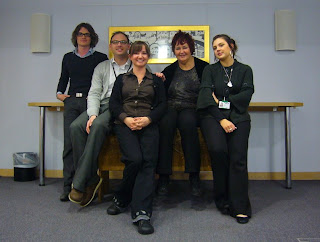 They´re all great and even better shown in only one post, with all the explanations.

My last comment disappeared. I am angry. Anyway, it said something about how spectacular these cuts are and how bunches of people will travel to England now just to see your art in the Towers. People who might have gone anyway, but now they have a real live purpose.

these are great :) it's awesome knowing I have a friend who's work is hanging near-ish if not in the Tower of London. But I bet they're in. I'm just going to say in. congratulations!!

these are wonderful!! congratulations.

Wow, these are amazing!

Hello Cindy. Confession: I am a stranger, and I have looked on your blog from time to time, from another friends friends blog, as random blog reading often happens these days. (I do however believe that we met just briefly on new years eve, in between swirling and swinging around dancing the ceilidh, or whatever that great dance was called.) I will give up my anonymity now because I really feel the need to say that your paper cutting art is truly magnificent, I can't stop looking at it. They are so perfect. I want to look at them, eat them, take pictures of them, draw them, own them, and hold them! Art is supposed to create emotions and yours certainly does! I feel so inspired! Felt the need to express that: You are very talented.
/Lena

I can't believe you left them in England! Was that on purpose?

Your work is so amazing. Thanks so much for sharing here.

Would you mind telling me how you attach your work to a background? Do you spray glue? Rubber cement? I never have felt I did a stellar job with that part.
Thanks. =)

wow, very beautiful work. in scotland just now but really want to get down south to see your work up close!

Billy, thanks! I like them with the frames too.

Kim, I don't know how many pilgrimages this project will create, if any at all, but I appreciate your enthusiasm. Thanks!

Sarah, oh, they're in the Tower!

Stephanie and Michael, thanks!

Sarah, Bran is one of my favorites too. I like the ravens.

Lena, what a great compliment, thank you! I do remember meeting you at New Years. Didn't we dance in a circle together or something? I will try to keep things interesting on my blog!

Andi, I would love to keep them with me, but I knew from the beginning that they had to stay.

Snippety Gibbet, I tend to just put little bits of glue at key points and then let the glass sort of hold the whole thing in place. I like it when it sort of is separate from the paper.

Emily, thanks! I don't know how accessible the education center is to regular tourists. It's mostly for tours for school groups. They might let you in if you ask though!

Cindy Bean
Salt Lake City, Utah
I have been designing for 15 years and papercutting for 7. I love them both!